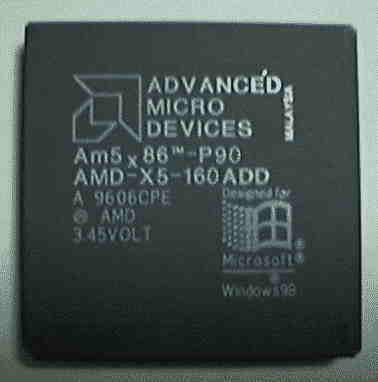 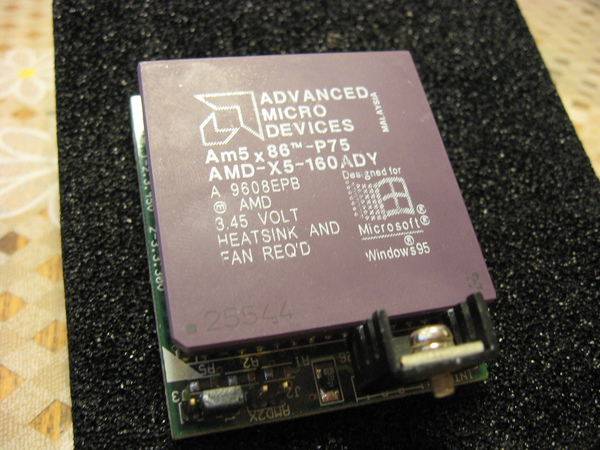 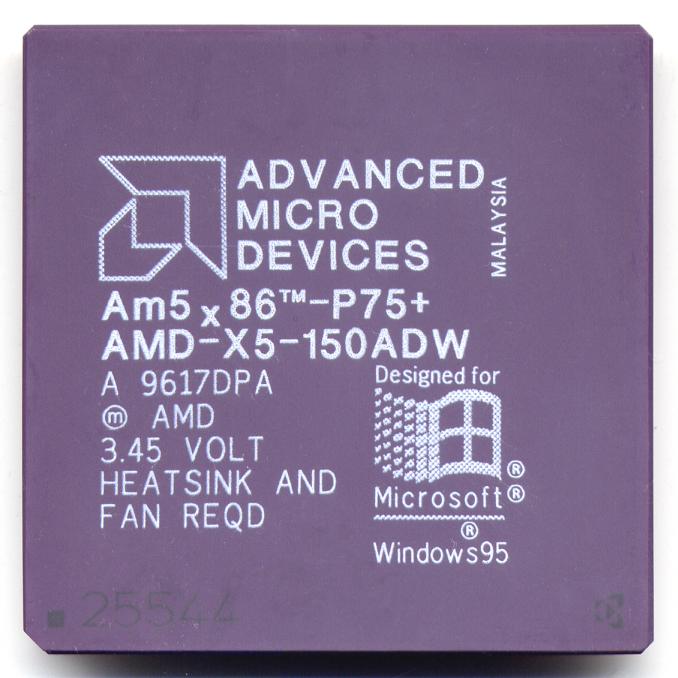 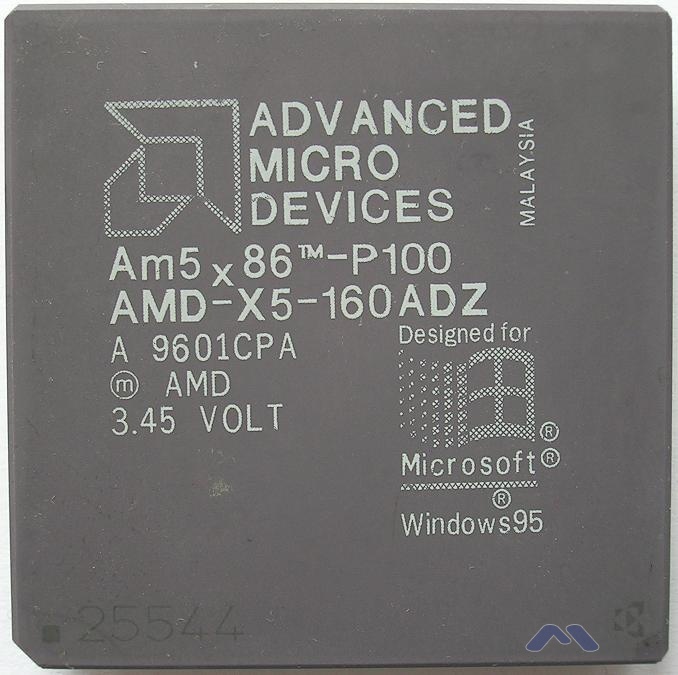 AMD Am5x86
The AMD 5x86 processor is an x86-compatible CPU introduced in 1995 by AMD for use in 486-class computer systems. It was one of the fastest, and most universally-compatible upgrade paths for users of 486 systems.
Introduced in November 1995, the AMD 5x86 (also known as 5x86-133, Am5x86, X5-133, and sold under various 3rd-party labels such as "Turbochip") is a standard 486 processor with an internally-set multiplier of 4, allowing it to run at 133 MHz on systems without official support for clock-multiplied DX2 or DX4 486 processors. Like most of the later 486 parts, the 5x86 featured write-back L1 cache, and unlike all but a few, a generous 16kilobytes rather than the more common 8k. A rare 150 MHz-rated part may have also been released by AMD. Since having a clock multiplier of four was not part of the original Socket 3 design, AMD made the 5x86 look for a two times setting from the motherboard and interpret that as four times instead. In other words, to use the 5x86 you want to set the motherboard to the 2x setting. This will actually cause the 5x86 to run at 4x. The chip will actually physically fit into an older 486 socket such as a socket 1 or 2 or the original 168-pin 486 socket, but doing this requires a voltage regulator since the AMD chip runs at 3.3 volts.

The combination of best-in-class clock speed and the write-back cache allowed the 5x86 to equal or slightly surpass an Intel Pentium 75 MHz processor in business application performance. Also, because it was based on a pure 486 design, it was compatible with older systems, something its slightly faster rival, the Cyrix Cx5x86, had trouble with. The CPU was commonly overclocked to 160 MHz, thereby giving performance similar to that of a Pentium 100 system. Although it has been reported that individuals have successfully run the chip at 200 MHz, this would seldom have been achievable due to the rarity of video cards that could cope with a 50 MHz system bus on a VESA system.

The 5x86 is also notable for the first-ever use of the controversial PR rating. Because the 5x86 was the equal of a Pentium 75 MHz processor in benchmarks, AMD later marketed the chip as "AMD X5-PR75".

Sales of the Am5x86 were an important source of revenue for AMD at a time when lengthy delays in bringing the AMD K5 to production were threatening the company's profitability.

AMD manufactured the 5x86 processor for ordinary PC systems until 1999. It was popular for entry-level desktop systems, appeared in many different notebook models, and also sold separately as an upgrade processor for older 486 systems. Several companies made upgrade kits which packaged an AMD 5x86 with a voltage regulator and socket converter, which allowed its use on almost any 486 motherboard ever produced.